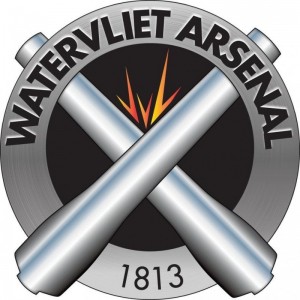 The Watervliet Arsenal /ˈwɔːtərvliːt/ is an arsenal of the United States Army located in Watervliet, New York, on the west bank of the Hudson River. It is the oldest continuously active arsenal in the United States, and today produces much of the artillery for the army, as well as gun tubes for cannons, mortars, and tanks. It has been a National Historic Landmark since 1966.[2][3]

The arsenal was founded in 1813 to support the War of 1812, and was designated as the Watervliet Arsenal in 1817. It occupies 142 acres (57 ha) of land, approximately 8 miles (13 km) north of Albany, New York. The location is adjacent to the Hudson River. The site contains manufacturing, administrative offices, storage areas, and a museum tracing weaponry from the 17th century through modern times. It also contains the Army's Benet Laboratories, which does product development, improvement, research, and testing.

The Arsenal has the historic Iron Building, which currently serves as the Watervliet Arsenal Museum. The museum closed on Oct. 1, 2013.

On 17 February 2009, the headquarters of the United States Army Albany Recruiting Battalion relocated to Watervliet Arsenal from its old location on Wolf Road