*Must be 18 to Enter, 21 to Drink Alcohol **No Outside Food or Beverages Permitted ***All Bags and Purses Are Subject to InspectionMenu - Printable PDFGet amped up for the ultimate gaming and entertainment experience. That’s right! There is a great hot spot in town located right on Fort Campbell. The Warrior Zone is a high-energy entertainment and recreation facility. Located at 3910 Indiana Avenue, the Warrior Zone has many elements for Soldiers to enjoy. Patrons must be 18 years of age to enter, and at least 21 years of age to drink alcohol.IMCOM Customer Service Pledge (.pdf) 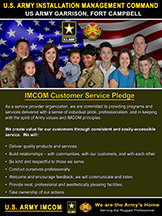 All called-in orders will require payment at the time of order placement.