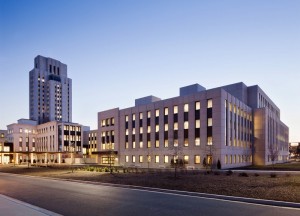 The Walter Reed National Military Medical Center, formerly known as the National Naval Medical Center and colloquially referred to as the Bethesda Naval Hospital, Walter Reed, or Navy Med, is a United States tri-service military medical center, located in the community of Bethesda, Maryland, near the headquarters of the National Institutes of Health. It is one of the most prominent U.S. military medical centers in the Washington, D.C. metropolitan area and the United States, having served numerous U.S. presidents since the 20th century.