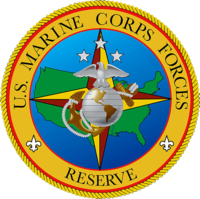 Marine Forces Reserve is the headquarters command for approximately 40,000 Reserve Marines and 184 Reserve Training Centers located throughout the United States. The mission of Marine Forces Reserve is to augment and reinforce active Marine forces in time of war, national emergency or contingency operations, provide personnel and operational tempo relief for the active forces in peacetime, and provide service to the community (for example, through Toys for Tots).