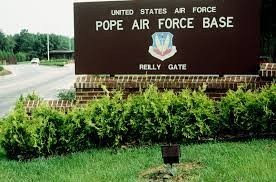 Pope has played a leading role in the development of U.S. airpower, with missions ranging from providing airlift and close air support to American armed forces, to supporting humanitarian missions worldwide. On March 27, 1919, the area was officially established by the War Department as Pope Field, making it one of the oldest installations in the Air Force. The base is named after 1st Lt. Harley Halbert Pope, who was killed on Jan. 7, 1919, when the JN-4 Jenny he was flying with Sgt, Walter W. Fleming, crashed into the Cape Fear River near Fayetteville. The transfer of Pope  Army Airfield to the Army's control is certainly a major event and was the result of the 2005 Base Closure and Realignment Commission.  Pope will continue to put the "air" in airborne for Fort Bragg missions by providing airlift and close air support to American armed forces and to humanitarian missions flown all over the world. For more history visit Pope's homepage.

Welcome to Pope Army Airfield, one of the busiest bases in the military, located in the Fayetteville, North Carolina area.

The base is nestled at the northern tip of Fort Bragg, approximately 12 miles northwest of Fayetteville. It is within easy access to many historical and unique sites. For instance, to the west are the Appalachian Mountains, and to the east are the "Outer Banks" and the North Carolina National Seashore. Within the state’s borders, there are many recreational areas and activities to satisfy everyone’s interests.