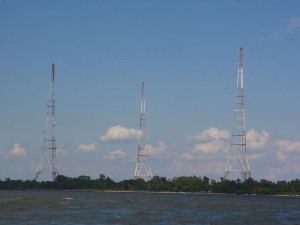 It was located at Greenbury Point, in Anne Arundel County, across the Severn River from Annapolis, Maryland at coordinates  WikiMiniAtlas 38°58′40″N 76°27′12″W. NSS Annapolis was used by the USN for submarine communication. The station consisted of an umbrella antenna supported by a 1,200-foot (365.76 m) high central mast, which was insulated against ground, 6 guyed masts of 800-foot (243.84 m) and 3 freestanding towers of the same height.

The huge towers were a local landmark, and served as a visual reporting point for aircraft landing at the nearby Baltimore-Washington International (BWI) airport. A golf course ran through the VLF antenna farm; special rules addressed hitting a tower with your ball (usually stroke and distance). The NSS HF receiver station, and the headquarters for NavCommStaWashingtonDC(T), was located at the Naval Communications Station in Cheltenham, Maryland until 1969. In late 1969, the receiver station at Cheltenham closed and a new receiver station was activated at Sugar Grove, West Virginia.