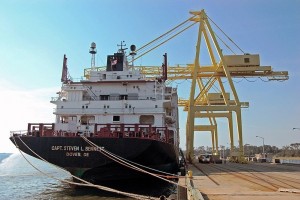 Military Ocean Terminal Sunny Point (MOTSU) is the largest military terminal in the world. It serves as a transfer point between rail, trucks, and ships for the import and export of weapons, ammunition, explosives and military equipment for United States Army. The 596th Transportation Brigade, United States Army, operates the terminal.

Built in 1951 and opened in 1955, the facility is situated on an Army-owned 8,500-acre (34 km2) site on the banks of the Cape Fear River in Brunswick and New Hanover counties of North Carolina approximately 26 miles (42 km) south of Wilmington, North Carolina. An additional 2,100 acres (8.5 km2) was set aside on Pleasure Island (location of Carolina, Kure, and Fort Fisher beaches) as a buffer zone around the facility.

It is the key ammunition shipping point on the Atlantic Coast for the Department of Defense and the Army's primary east coast deep-water port. The Terminal is not an open post and access is restricted. No access is available to the non-assigned active military, retirees, or public. The wharfs are also restricted and not accessible to the public (no landing or docking). The Cape Fear River directly in front of the wharfs is restricted and the public and commercial boat/ship traffic is restricted to transit only (no anchoring). The terminal employs some 250-300 government employees, 3-5 Active duty military, and 25+ military contractors. Sunny Point is the only Department of Defense terminal equipped to handle containerized ammunition.[3]

The port can handle up to 6 ships simultaneously and features large cranes for loading and unloading vessels. A network of 62 miles (100 km) of railroad tracks move munitions and supplies around the facility. To minimize the effect of any accidental explosions, buildings at the facility feature Plexiglas windows rather than glass windows.

The earliest known use of the area dates to 1725 when George Burrington operated a plantation following his first term as colonial governor of the then Province of North Carolina. It later was known as Snows Point when owned by rice planter Robert Snow. During the civil war, the area served as a battery protecting the Cape Fear River. Its isolation, few structures and access to deep water made it an ideal location as an ammunition transfer point. Sunny Point was built in 1951 and opened in 1955.

The port has transferred munitions to every major armed conflict since it was established. The port was very active during the Vietnam War with up to six ships being simultaneously loaded. 466,000 tons of cargo was transferred through MOTSU during the Persian Gulf War.