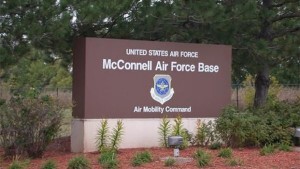 The 22nd Air Refueling Wing is the host unit at McConnell AFB, and part of the Air Mobility Command, Scott AFB, IL. The wing's primary mission is to fuel the fight through combat-ready Airmen, aircraft, and mission support. To do this, the wing is charged to develop and maintain the capability to conduct air-refueling operations supporting command objectives in any part of the world, in any condition or climate. This commitment also includes support for the Department of Defense in many contingency situations, from strategic force protection and strategic force mobility to humanitarian assistance.

McConnell's history began with the creation of the Wichita Municipal Airport in 1929. The Airport became Wichita Air Force Base on May 15, 1953. The basename changed to McConnell Air Force Base on April 12, 1954, in honor of two of the three flying McConnell brothers, Fred and Thomas, and later for Edwin, all of World War II fame. The three McConnell brothers, from Wichita, gained recognition as the "three of a kind" in the war. For more history visit McConnell's homepage.

The population of Sedgwick County Kansas 521,158. Wichita (population 391,352) is the largest city in Kansas. A regional center of business, healthcare, and entertainment, more than one million people live within 100 miles of Wichita. The population of Wichita has grown at a rate of about 1.8% since 2010 as per data.