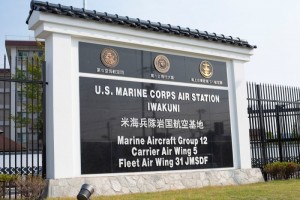 Marine Corps Air Station Iwakuni, Japan, is situated approximately 600 miles southwest of Tokyo. It is located in the Nishiki River delta at Iwakuni City, where it lies at the eastern end of Yamaguchi Prefecture, the southern end of the main island of Japan. The city is backed by the mountains and fronted by the Seto Inland Sea, and its northern part adjoins Otake City in Hiroshima Prefecture. Running from east to west, the Nishiki River is vital to the over 150,000 residents and a large number of factories in the city.

MCAS Iwakuni is home to approximately half of the 1st Marine Aircraft Wing that is headquartered on Okinawa, elements of the 3rd Force Service Support Group, Fleet Air Wing 31 of the Japan Maritime Self Defense Force, and other units of JMSDF. At present, the station has about 15,000 personnel, including Japanese national employees.