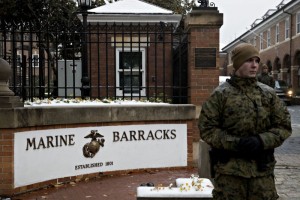 Marine Barracks represents the oldest military installation operated by the United States Marine Corps. It is located in Washington, DC, and spreads over 6 acres only. The place is commanded by Paul D. Montanus and is also a National Historic Landmark since 1976, Unlike many other installations run by the United States Marine Corps, this one is also open to the public, but only at specific occasions, ceremonies and parades.

Marine Barracks, Washington, D.C. is located at the corner of 8th and I Streets, Southeast in Washington, D.C. Established in 1801, it is a National Historic Landmark, the oldest post in the United States Marine Corps, the official residence of the Commandant of the Marine Corps since 1806, and main ceremonial grounds of the Corps. It is also home to the "Commandant's Own" Marine Drum & Bugle Corps and the "President's Own" U.S. Marine Band. Barracks Marines conduct ceremonial missions in and around the National Capital Region as well as abroad. They also provide security at designated locations around Washington, D.C. as necessary, carry out the distance education and training program of the Marine Corps through the Marine Corps Institute, and Barracks officers are part of the White House Social Aide Program.

Marine Barracks Washington and the Historic Home of the Commandants were listed on the National Register of Historic Places in 1972. A 6-acre (2.4 ha) property with eight contributing buildings was included in the listing.