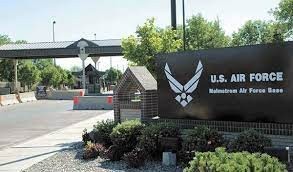 Organizations The 341st Missile Wing is made up of a wing staff and five groups - the 341st Operations Group, 341st Maintenance Group, 341st Mission Support Group, 341st Security Forces Group and 341st Medical Group. The base is also host to two tenant squadrons, the 819th RED HORSE Squadron and the 40th Helicopter Squadron, as well as multiple other tenant units.

Malmstrom's history began in 1939, when the Chamber of Commerce contacted Montana’s senators to request the establishment of a military installation in Great Falls. Construction on Great Falls Army Air Base began in June 1942. On November 30, 1942, the first B-17 Flying Fortress landed at Great Falls Army Air Base. Great Falls was a northern tier location for heavy bomber training. The B-17 training program ended in October 1943. Through the Lend Lease Program aircraft and supplies were given to the Soviet Union to fight the German Army. This continued until September 1945, when World War II ended. In 1954, the Vice Commander, Col. Einar Axel Malmstrom, died when his T-33 crashed. Although his tenure was short, he was well liked by the local community. On June 15th, 1956, the base was officially dedicated as Malmstrom AFB. Since the first B-17 landed here, Malmstrom has had a variety of missions. The first Minuteman ICBM arrived on base by rail July 23, 1962. Later that year the missiles assigned to the nations first Minuteman ICBM wing would play a major role in the Cuban Missile Crisis. President Kennedy said the Soviets backed down because they knew he had an "Ace in the Hole," referring directly to the Minuteman missiles of the 10th Missile Squadron. For more history visit Malmstrom's homepage.

Approximately 4,000 people, including more than 3,300 active-duty and 600 civilians, comprise the 341st Missile Wing.

Malmstrom is the youngest community in Montana and the youngest workforce in the Air Force. Fifty-one percent of officers are Lieutenants and 77% of enlisted are Airmen-Staff Sergeants. Of our more than 4,000 employees, 88% are military members and 12% are civilian employees.

Malmstrom is located in Great Falls, Montana. Great Falls has a hometown atmosphere, the people are friendly and the city is clean. The area is filled with scenic beauty & natural wonders.