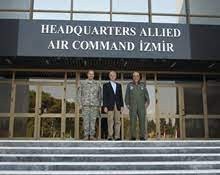 As a geographically separated unit of the 39th ABW at Incirlik, Turkey, the 425th Air Base Squadron (ABS) supports the NATO Land Command Headquarters here in Izmir and GSU at Istanbul. The NATO  Land Command Headquarters is led by an American U.S. Army Lieutenant General and consists of military members and civilians from the U.S. and 16 of the 19 NATO countries. The 425 ABS does everything normally accomplished by a wing with the exception of operations. Additionally, the 425 ABS maintains the U.S. facilities on Cigli (pronounced Chili) Air Base, a nearby Turkish Air Force installation. The 425 ABS primary customer is NATO's Component Command Land Headquarters-Izmir. The land component is responsible for the full range of NATO air operations throughout the AOR stretching from the Azores and Canary Islands to eastern Turkey.