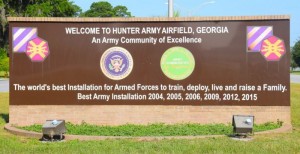 Hunter Army Airfield, located in Savannah, Georgia, United States, is a military airfield and subordinate installation to Fort Stewart located in Hinesville, Georgia. Hunter features a runway that is 11,375 feet long and an aircraft parking area that is more than 350 acres.

When the Air Force closed their base at Hunter Field in Savannah, in 1967, the Army promptly assumed control and the U.S. Army Flight Training Center was developed in conjunction with the flight training being conducted at Fort Stewart. The helicopter pilot training was rapidly accelerated and pilots were trained and soon sent to duty all over the world, with a large percentage seeing active duty in Viet Nam. After a brief closure at the end of the war in Viet Nam, HAAF was reopened when the 1st Battalion, 75th Infantry Regiment (Ranger), parachuted into Fort Stewart and reactivated it. Hunter Army Air Field assumed an important role supporting the training and activities of the Rangers. On October 30, 1998, the new Departure/Arrival Airfield Control Group (DAACG) facility, named the Truscott Air Terminal, was dedicated at HAAF. For more information, visit the Fort Stewart website.

Hunter Army Airfield (HAAF) is located in Savannah, GA. The cost of living is low, and houses range in price depending on the area in which you choose to live. Savannah has a large trained workforce, little traffic congestion, a year-round ideal climate, all the amenities of a large city. The installation's base operator is 912-767-1411 or DSN 312-870-1411.