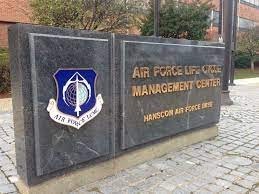 Hanscom Air Force Base is a United States Air Force base located predominantly within Bedford, Massachusetts, with portions extending into the adjoining towns of Lincoln, Concord, and Lexington. The facility is adjacent to Hanscom Field which provides general aviation and charter service.

Hanscom AFB manages the development and acquisition of electronic command and control systems. These systems gather and analyze information of potentially hostile forces, enabling commanders to make quick decisions and rapidly pass them on to their forces. Hanscom helps to direct the muscle of America's air-power to the right target at the right time.

LG Hanscom Field was built in 1941 and served originally as a training base for P-40 Warhawk pilots bound for North Africa. The base soon took on the air defense of Boston as an additional mission. By the 1950s, the Army Air Force and MIT were coordinating early computer and electronics research. The base's operational mission diminished, while its role in the development of air defense systems grew. Today acquisitions excellence is Hanscom's primary mission. Hanscom is currently an Air Force Life Cycle Management Center (AFLCMC) for AFMC, comprising the Battle Management and C3I&N Directorates and the 66th Air Base Group. For more history visit Hanscom's homepage.

The population of towns that surround Hanscom AFB:

Hanscom AFB provides operating support and quality of life, medical, civil engineering, personnel, logistics, safety, security, and all other services to the Battle Management and C3I&N Directorates in the AFLCMC, MIT Lincoln Labs, and other tenant groups. Hanscom supports service members and families from the Air Force, Army, Navy, Marines, and Coast Guard. We have almost an equal number of officers and enlisted personnel. Hanscom serves 125,000 people in a seven-state region with over 300 GSU's.

Hanscom AFB is in Middlesex County, MA, and touches the towns of Bedford, Concord, Lincoln, and Lexington - the birthplace of America. Hanscom is approximately 20 miles northwest of Boston, MA; 25 miles south of Nashua, New Hampshire; and 85 miles from Portland, Maine. Hanscom is about 4 hours from New York City. This fabulous area offers an amazing array of outdoor activities, city culture, arts, and history. It is also very family-friendly.