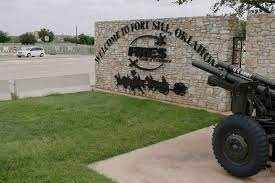 The Fires Center of Excellence trains educates, and develops Soldiers and Leaders; creates and develops capabilities; and provides a Fires Force to support the Joint Warfighting Commander across the spectrum of operations in Joint and Multinational environments.

MG Philip H. Sheridan staked out the site that would become Fort Sill in January 1869. Sheridan was leading a campaign into Indian Territory to stop hostile tribes from raiding border settlements in Texas and Kansas. Troops from the 10th Cavalry, a distinguished unit of African-American "Buffalo Soldiers" who constructed many of the stone buildings still surrounding the Old Post Quadrangle, camped at the new fort. Field Artillery first arrived in 1902 and home to the Field Artillery since 1911.  It is the original home of the Infantry and Aviation.  USMC Artillery home since 1951.  As Home of the Field Artillery, Fort Sill is not only at the forefront of tremendous technological advances, but it is also steeped in natural, living history. Fort Sill is also a National History Landmark.  Fort Sill is the only remaining active fort built during the Indian Wars.  Fires Center of Excellence sine 2009.

Fort Sill is a large installation. The total population in Fort Sill is about 53,000 including, 20,000 military and civilian personnel, and 33,000 military family members. There is a robust retiree community that is supported by Fort Sill.

The population of Lawton Fort Sill as of Census 2010 was 96,867. The average household size is 2.48 persons. 64.5% of households are families. 20.5% of Lawton's population aged 18 and older are civilian veterans of the military.

Fort Sill is located in southwest Oklahoma, Comanche County, and adjacent to the city of Lawton. It is 90 miles southwest of Oklahoma City, the state capitol, and 50 miles north of Wichita Falls, Texas on Interstate 44.

All field artillery soldiers and marines receive their training here, as well as many international students from allied nations. Fort Sill is home to the Field Artillery Training Command and many tenant activities.

At Fort Sill, we take enormous pride in our community, which is a community of excellence in spirit as well as in name. The wellspring of our excellence lies within our people; soldiers, marines, civilians, and families of Fort Sill unite in a common and abiding commitment to care for one another and treat everyone with dignity. The Welcome Center's phone number is 580-442-3217.