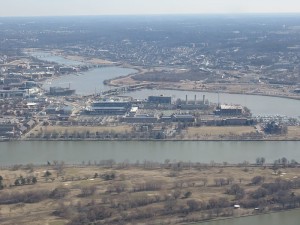 Fort Lesley J. McNair is a United States Army post located on the tip of Greenleaf Point, the peninsula that lies at the confluence of the Potomac River and the Anacostia River in Washington, D.C. To the peninsula's west is the Washington Channel, while the Anacostia River is on its south side. The fort has been an army post for more than 200 years, third in length of service, after the United States Military Academy at West Point and the Carlisle Barracks.

The military reservation was established in 1791 on about 28 acres (110,000 m2) at the tip of Greenleaf Point. Major Pierre (Peter) Charles L'Enfant included it in his plans for Washington, the Federal City, as a major site for the defense of the capital.[1]

An arsenal first occupied the site and defenses were built in 1794. The fortifications did not halt the invading British in 1814. Soldiers at the arsenal evacuated north with as much gunpowder as they could carry, hiding the rest in a well as the Redcoats came up the Potomac from burning the capitol. About 47 British soldiers found the powder magazines they'd come to destroy empty. Someone threw a match into the well and "a tremendous explosion ensued," a doctor at the scene reported, "whereby the officers and about 30 of the men were killed and the rest most shockingly mangled." The remaining soldiers destroyed the arsenal buildings, but the facilities were rebuilt after the war. Land was purchased north of the arsenal in 1826 for the first federal penitentiary. The conspirators accused of assassinating president Abraham Lincoln were imprisoned there and, after being found guilty, four were hanged and the rest received prison sentences. Among those hanged was Mary Surratt, the first woman ever executed under federal orders. A hospital was built next to the penitentiary in 1857, and Civil War wounded were treated at what then was called the Washington Arsenal. The arsenal was closed in 1881, and the post transferred to the Quartermaster Corps.