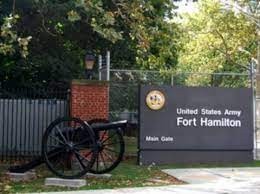 The cornerstone of this coastal defense fort was set in 1825, and the first garrison flag was raised in 1831. While many of the original structures are gone, some having yielded to the construction of the Verrazano Narrows Bridge, still part of the old fort remains on the grounds of the United States Army Fort Hamilton Garrison. Colonels Row, the Fort Hamilton Community Club, Lee House and the Harbor Defense Museum are on the National Register of Historic Places. The historic museum is located in the caponier of the old fort and is virtually untouched. Today, Fort Hamilton is under the command of the Military District of Washington. Fort Hamilton is also the home of the New York City Recruiting Battalion, the Military Entrance Processing Station, the North Atlantic Division Headquarters of the US Army Corp of Engineers, the 1179th Deployment Support Brigade, 77th Regional Readiness Command, and New York Army National Guard Task Force Empire Shield. Fort Hamilton also supports many Reserve and National Guard units.