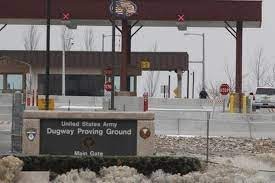 The attack on Pearl Harbor, in 1941, jarred the United States and its military forces. The nation suddenly realized a need for increased military capability in many areas, which included expanded knowledge in chemical and biological warfare. On February 12, 1942, Dugway Proving Ground was established, and testing was underway by that summer. Dugway was authorized to fill the need for testing weapons and defenses against chemical and biological weapons of mass destruction. Important projects during this early period included testing incendiary bombs, chemical weapons, and modified agents as spray disseminated from aircraft. Over the years, Dugway has expanded in size to 798,855 acres. In addition to chemical and biological defensive testing and environmental characterization and remediation technology testing, Dugway is the Defense Department's leader in testing battlefield smokes and obscurants. Also, within the last few years, Emergency Responders, i.e., Civil Support Teams (CST), are able to train at Dugway and become better prepared in case of terrorist attacks or chemical/biological incidents.

U.S. Army Dugway Proving Ground (DPG) is located approximately 80 miles southwest of Salt Lake City, Utah. Dugway Proving Ground is situated in Tooele County, located in Utah's historical west desert region. Comprised of over 1300 square miles of high mountain desert, a land area greater in size than the state of Rhode Island. DPG is a closed Post with no public access. Due to the remote location, the self-contained resident community is unique since it consists of a higher number of government civilians and support contractors living on post than military personnel. The base operator's phone number is 435-831-2116, DSN 314-789-2116.