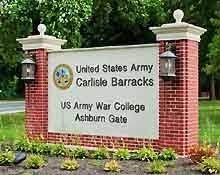 Carlisle Barracks is located in Cumberland County in South Central Pennsylvania, near the state capital at Harrisburg. Agriculture, tourism, industry, and services all play vital roles in the local economies. Harrisburg, and nearby Hershey, combine to form a nucleus of culture, education, healthcare, and government. Carlisle Barracks is one of the oldest active military posts in the United States. The cost of living in Cumberland County compares favorably to those of the metropolitan areas and adjacent counties. Housing costs run about fifteen percent less, health care costs are about five percent less, and grocery costs are about two percent less than surrounding areas. The base operator's phone number is 717-245-3131.