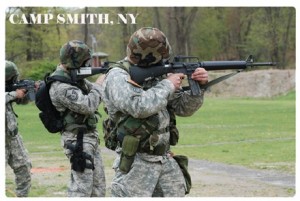 Camp Smith is a military installation of the New York Army National Guard in Cortlandt Manor near Peekskill, NY, about 30 miles (48 km) north of New York City, at the northern border of Westchester County, and consists of 1,900 acres (7.7 km2). Established in 1882 by General Frederick Townsend, Adjutant General of New York, it was formerly known as "Camp Townsend", but was renamed in 1919 to "Camp Smith" for Governor Alfred E. Smith of New York.

The camp has been used as an annual training site for National Guard regiments since its establishment, and recently has served as the home of the Empire State Military Academy, as well as the state's Non-Com and Officer Candidate School.[3] It also hosts some other, minor units (e.g. 42nd Infantry Division Band, 138th Chaplain Support Team).