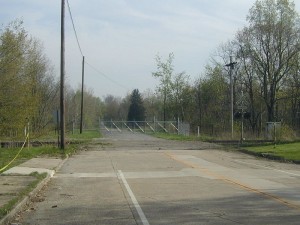 Camp Ravenna Joint Military Training Center, formerly known as the Ravenna Training and Logistics Site and the Ravenna Army Ammunition Plant and commonly known as the Ravenna Arsenal, is an Ohio Army National Guard military base located between Ravenna and Newton Falls and adjacent to the village of Windham in the U.S. state of Ohio. Before its present status as a training facility for the Ohio National Guard, Camp Ravenna was a military ammunition production facility for the United States Army. As an arsenal, the facility was at peak operation during World War II and would serve as an ammunitions plant in various roles until 1992. Camp Ravenna remains an important part of the history and geography of Portage County, Ohio. The facility occupies portions of Freedom, Windham, Charlestown, and Paris townships in Portage County, along with part of Braceville Township in Trumbull County.