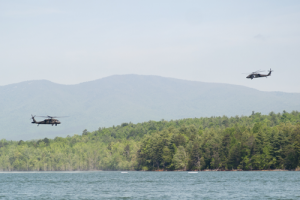 Camp Butner was a United States Army installation in Butner, North Carolina during World War II. It was named after Army General Henry W. Butner. Part of it was used as a POW-Camp for German prisoners of war in the United States and this site eventually became the Federal Correctional Complex, Butner. The Camp site was chosen around early January 1942 to have a major training area built and in just 6 short months, over 3500 buildings were constructed. There were enough beds in the enlisted barracks alone to accommodate over 35,000 soldiers.

After the war, the Camp was used as a major facility for the demobilization and deactivation of Army units returning from the war. Among the units deactivated at the camp were the 3d United States Infantry Regiment and the 4th Infantry Division.

The Camp was also the location of the Battalion Surgeon's Assistant school.

Effort is currently under way to establish a museum in Butner dedicated to the soldiers and civilians who called the Camp home from 1942-1946. The Camp Butner Society, a 501c3 non-profit is dedicated to preserving and telling the story of the area and the North Carolina National Guard is assisting them in their goal. The Society has the last remaining wooden structure of its type original to Camp Butner that will eventually house the museum but will require extensive restoration before that can occur.